Palaeocological studies and the human-environment relationships at the multicultural settelment site of Smólsk (Kuyavia, Central Poland)

The site of Smólsk, located in the commune of Włocławek, in the eastern part of the Kuyavian Lakeland, was subjected to archaeological rescue excavations accompanying the construction of the A-1 highway. In the investigated area, numerous archaeological features were uncovered, including clay huts, storage pits, and waste pits, postholes, burials in clay huts, skeleton and cremation graves, hearths, and concentrations of ceramics. The entire area, extending on several hectares, makes a settlement complex exceptionally abundant in traces of settlement, particularly Neolithic, even in the oldest chronological horizons. Materials from site 2/10 in Smólsk complement the results of basic studies by Grygiel (2004, 2008) on the Neolithic in the region of Brześć Kujawski and Osłonki, and provide many new important data and detailed information to the previous research. Site 2/10 in Smólsk can be considered unique in every respect and of great scientific importance, particularly in research of the older Neolithic. The significance of this area, belonging to the largest, oldest, and most widely explored Neolithic sites in Poland, definitely should be recognized also beyond the Kuyavian region.

The multicultural settlement in Smólsk 2/10 covers the surface of a morainic plateau, however, its immediate surroundings showed a strongly diversified landform, surface geological structure as well as plant and soil cover. In various chronological periods, local residents could easily access such landscape zones as the till morainic surface, postglacial upland, sandy surface of a vast river terrace, peat plain, lacustrine basin at the bottom of a subglacial channel, and small closed depressions on the surface of the morainic upland. All the above-mentioned forms were situated at a distance shorter than 2 km from prehistoric settlement centers.

Typical archaeological studies were accompanied by preliminary interdisciplinary research in the field of environmental archaeology. The site is typified by the occurrence of vast natural depressions filled with the fossil Black Earth (Gleyic Phaeozem), up to 180 cm thick and covering an area of several ares. These layers, particularly at the base, include numerous artifacts of the Linear Band Pottery Culture, indicating that the original relief was much more diversified than the present-day one. Nearly all of the discovered prehistoric features were found in higher areas, surrounding the depressions. The south-eastern peripheries of the study site include a kettle hole, incorporated into a small valley, presently filled (often temporarily) with a small, partly regulated watercourse. Drillings carried out with a geological auger in this area revealed the presence of thick lacustrine deposits. The obtained, nearly 10 m thick profile of these sediments should provide the basis for numerous palaeoecological analyses. Additionally, three geological excavations made within the fossil basin appeared to include a record of its northern and western edge as well as (in the central excavation) thick layers of gyttja and peat.

All profiles were sampled for palaeoecological studies. Preliminary sedimentological and geochemical analyses, as well as examinations of pollen, plant macroremains, Cladocera, Diptera, and malacofauna, were performed only for the surface, 3.5 m thick organic deposits collected at the deepest part of basin. According to 14C dating, the sediments bear a record of the last 6000 years. Results of other analyses confirmed the existence of a small (ca. 1 ha) mesotrophic lake. Periodic fluctuations in its water level and pH were documented as well. Since the Neolithic, the water level was relatively low. Lakeshores were overgrown by plant communities requiring better trophic conditions while the closest surroundings of the basin were affected by deforestation. The available results of palaeoecological studies enabled an initial reconstruction of prehistoric (since the older Neolithic) palaeoenvironmental conditions. Further analyses, combined with results of geoarchaeological and bioarchaeological research, shall provide the basis for the reconstruction of environmental conditions accompanying the settlement functioning in Smólsk and of the human-environment relationships in subsequent chronological periods. 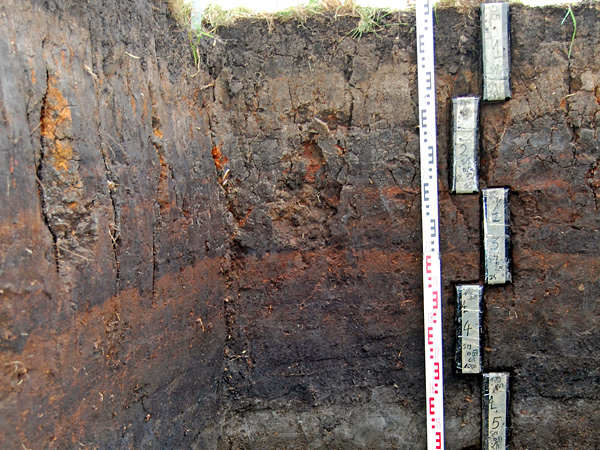 A profile of lake sediments in the vicinity of the settlement complex discovered in Smólsk.
Photo: R. Stachowicz-Rybka