Does the invasion of Japanese knotweed lead to the formation of "mycorrhiza desert"?

Japanese knotweed (Reynoutria japonica) is one of the world's fastest-spreading and most difficult-to-control invasive plant species. It was brought to Europe in the first half of the 19th century from East Asia as an ornamental and usable plant. Since then, it has colonized a large area of Europe (including Poland), North America, Australia and New Zealand.

Japanese knotweed is a tall (up to 3 m), highly branching perennial. Its shoots grow quickly (at a rate of 3–8 cm per day), giving the plant an advantage in competing for light. Extremely vigorous rhizomes and stolons enable colonization of new space, which knotweed fills tightly in a short time, creating a dense thicket. All these traits make knotweed a highly expansive species, posing a serious threat to native nature.

Even though Japanese knotweed has attracted the interest of scientists and practitioners for years, the effects of its invasion on the functioning of natural and semi-natural ecosystems are still poorly understood. Among other things, no clear data are showing how this species affects the soil, especially soil microbiological properties. In recent years, a team led by Dr. Anna Stefanowicz from our Institute (carrying out tasks under the NCN grant: 2016/23/B/NZ8/00564) has joined the group of researchers dealing with this issue. The latest article by this team is devoted to the influence of knotweed on arbuscular mycorrhizal fungi (AMF) communities:

Japanese knotweed, unlike most resident herbaceous species, does not associate with AMF. It can therefore be assumed that one of the effects of long-term and intense impact of this plant on the soil will be the formation of "mycorrhizal desert" (especially in places where knotweed forms dense, almost monospecific thicket). The results of the conducted study only partially confirmed this hypothesis. Although the AMF communities under the knotweed were qualitatively and quantitatively significantly poorer than those under the resident vegetation, they did not disappear completely. Their persistence under the conditions of many years of dominance of the invader – optimistic from the point of view of the future restoration of resident plant communities – was most likely related to the presence of a few resident mycorrhitic plant species, that were not eliminated by knotweed. You can read about what plants they were in another publication by the same team of researchers: 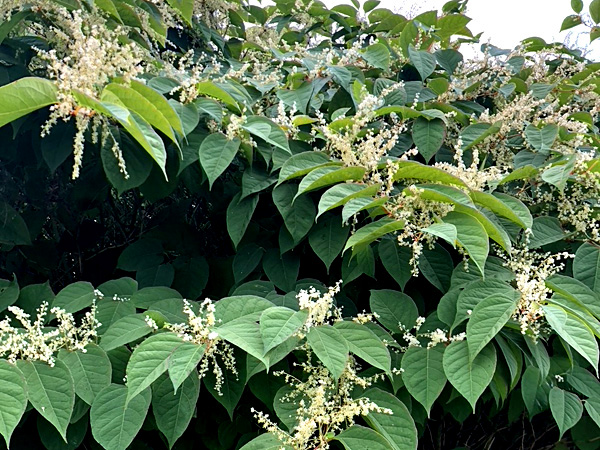 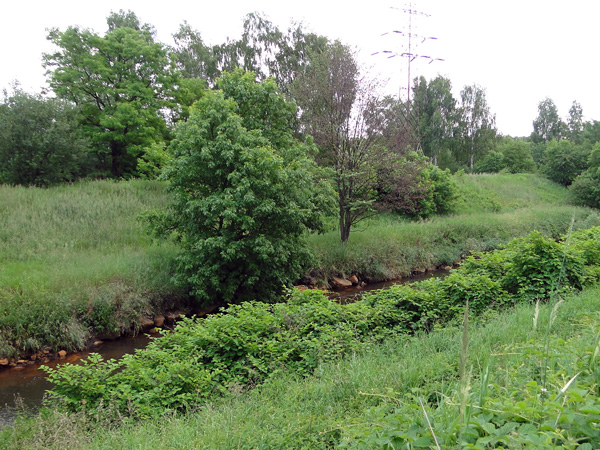 Japanese knotweed spreading along a watercourse.
Photo: A. Stefanowicz. 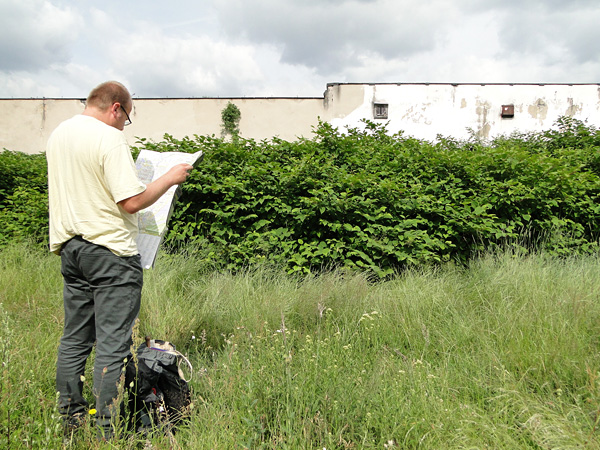 Japanese knotweed in a ruderal site.
Photo: A. Stefanowicz. 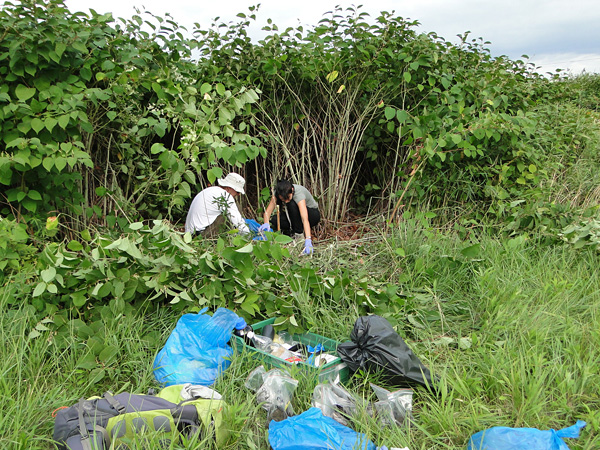 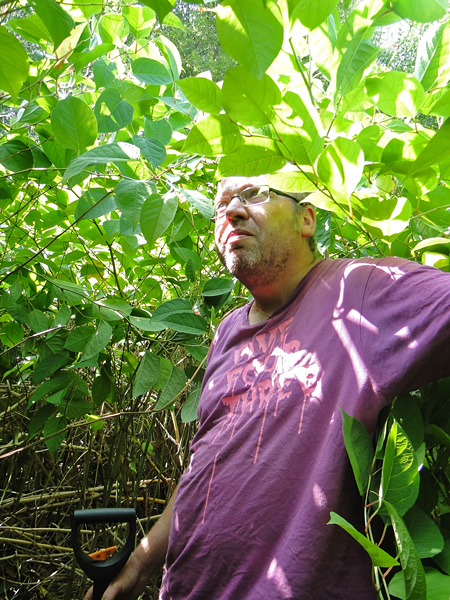 The dense knotweed canopy limits the access of light to herbaceous plants.
Photo: A. Stefanowicz. 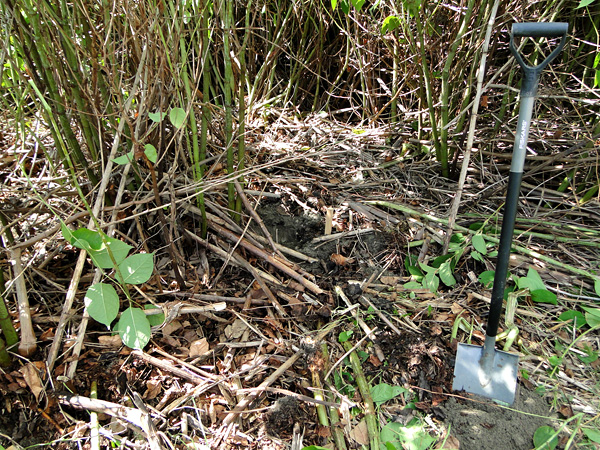 It is difficult to find other species of plants under Japanese knotweed at the peak of the growing season.
Photo: A. Stefanowicz. 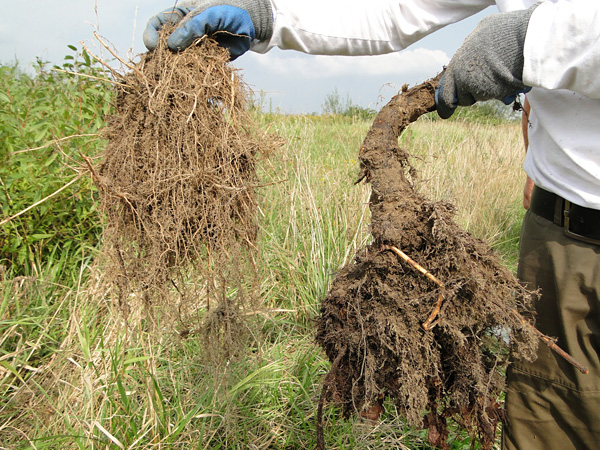 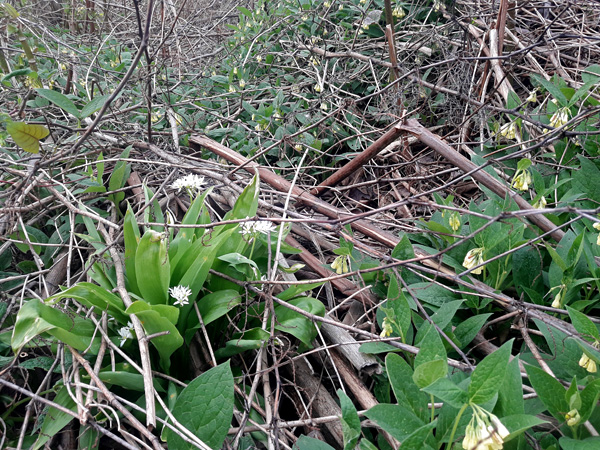 Spring geophytes – Allium ursinum and Symphytum tuberosum – are one of the few species found in the knotweed patches.
Photo: M. Woch. 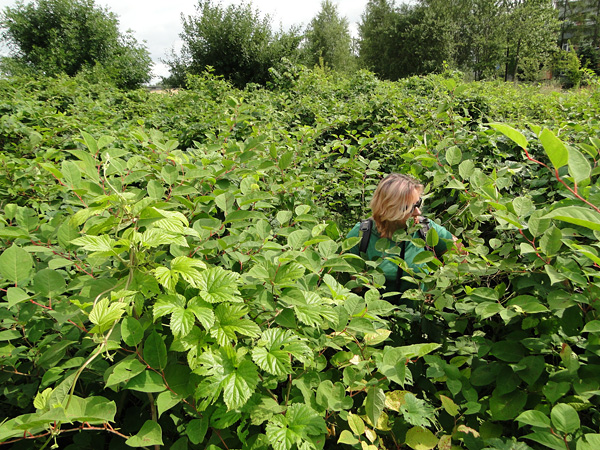 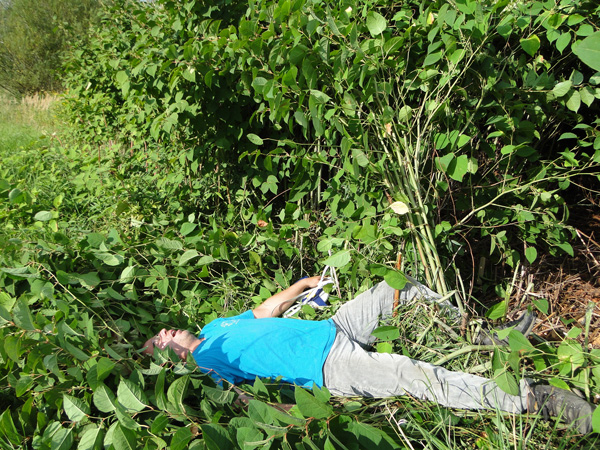 Japanese knotweed is a plant that is really hard to overcome ;)
Photo: A. Stefanowicz.